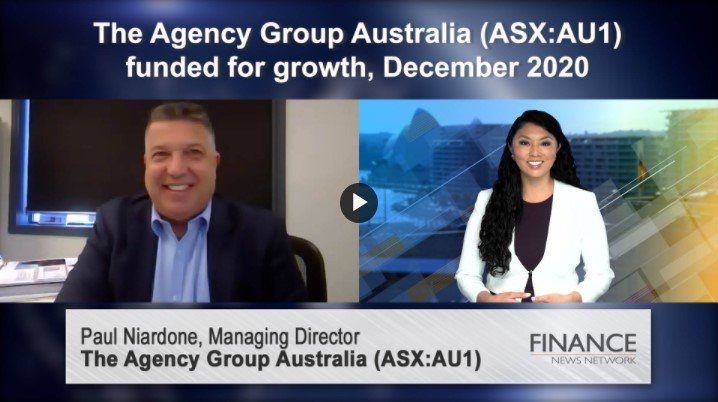 Paul Niardone: Thank you for having me, Melissa.

Melissa Darmawan: First up, can you start off with an introduction to the company?

Paul Niardone: We're the fastest growing real estate group in the country. We're a new disruptive model. We're based on a digital platform that enables our agents to work from anywhere. We're very different from the franchise model in that we've corporatised the industry. And what I mean by that is we've taken the franchisor level out, so, it's only head co and the agent, and this has allowed for a better commission distribution. But more importantly is the core difference, which is the agent is the core of our model. So, for us, the agent is our client, not the vendors. And our job is to help the agent do their jobs better and more productive by taking non-productive activities away from them and allowing them to do what they do best, which is list and sell.

Melissa Darmawan: Now to your recently announced funding package, how much was raised, who is backing the company and how does it impact the business?

Paul Niardone: The market was telling us, especially during COVID, they were worried about our balance sheet and our debt levels. So, as a board we addressed that, and we were addressing it actually prior to COVID. And we did that by actually getting a strong backing from a family office, which is driven by Mr Bob Peters, who's a quite well-known entrepreneur here in WA. And what he's effectively done is taken half of the debt. He's put up $6 million of debt up through a con note, which can be converted to equity as time goes on. And what that’s done is given comfort to Macquarie Bank to extend their loan facilities to us, or $5 million for a further two years. So, it's cleaned up the balance sheet and gave us now security over our financing going forward.

Melissa Darmawan: Now to financial results, what were the highlights, starting with FY20 financials?

Paul Niardone: Well, we had a big turnaround in FY20 with over a $2.4 million EBITDA, which was a fantastic turnaround from the previous year. During FY20 we started to become cashflow positive for the quarters. As you know, we've only been around for just under four years, so we're a new company. And in that time we've developed a national network and recruited over 300 agents. So we knew we were going to be investing money back into the business and not going to be making a profit. We are now making good returns for the company and have got a solid foundation to move forward off the back of that.

Melissa Darmawan: What's the outlook for the next six months and longer term?

Paul Niardone: So, the difference from the last four years is actually people now are looking at quite a bullish real estate market. We were sort of rowing against the tide in the first four years of our development, when the markets, especially from financial markets, were looking at the real estate market in a quite a poor fashion. Now, things have turned around. The media is quite positive on the market. I think with the interest rates, the real estate market is going to be quite strong for a few years to come. And we've now got the platform to take advantage of that with our agents. We're growing our agent numbers. I think we're way undervalued, if you can see what our asset position to what our market cap is. And given that I think we'll have good half yearly results as well, I think the market will recognise that.

Melissa Darmawan: Last question, Paul. Is there anything else you would like to add?

Paul Niardone: Yes. As I said, we're virtually a start-up, for want of a better term, and I know that gets bandied around a lot. But to achieve over $40 million in revenue in just under four years, to recruit 300 agents, to have a great platform that allows agents to work anywhere. And we've built this to scale, so now every recruit actually adds to our bottom line. And as I mentioned before, I think we're undervalued in terms of our market cap to what we have in terms of our asset value, and will continue to deliver good results. And I think then in the new year, we will probably get rerated by the market.

Melissa Darmawan: Paul Niardone, thanks for the introduction.

Paul Niardone: Thank you for your time. Thanks for having me.

Previous Article Sharecafe.com.au "The Agency On A Mission To Disrupt Real Estate"